Memoir: In Michigan, We Go Up North

This in-the-works manuscript describes the camping trips that saved me from my high school self. My path to deliverance started with an English class and a charismatic teacher, and then a canoe trip that attracted a group of vulnerable students seeking communion and meaning beyond what high school had to offer. A 1973 trip down Michigan’s Au Sable River led to a several-year odyssey of excursions, Michigan’s highways taking us far away to tents, cabins, rivers, lakes, the piney woods. Wherever Julia led, I followed her ever-quivering compass, loyal, blind, trusting it would read true.

Memoir: Can You Get There from Here? High Hopes for Higher Education

This 100,000-word completed manuscript describes my last two years at Kalamazoo College written in a contemporary voice and supplemented with journal entries from the 1970s. During junior year I studied abroad in Madrid, Spain. I returned to my mother’s breast cancer diagnosis, a troubled non-romance with a young man who turned out to be gay, school successes, career choices, and a senior-year grand finale involving a night in jail.  Good thing grad school awaited. 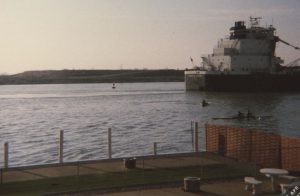 I write about everything! My completed 60,000-word manuscript, Downriver from Detroit: A Collection of Essays, reflects major themes in my life:

Observations on everyday occurrences from a 61-year-old feminist perspective

Downriver, the industrial suburbs south of Detroit where I grew up

My elderly Dad and his dementia

Characters, human and not

The alternative existence I led in high school, camping with friends

College study abroad in Madrid and beyond

Two essays were published in the Ann Arbor Observer:  “Fungus Among Us” and  “An Ann Arbor Goldilocks Tale” (entitled “Couch Surfer).

“Just Downriver from Detroit” was published April 19, 2019 in Belt Magazine.